**This recap contains spoilers so if you haven't yet watched this episode, go do that first**


The premiere episode of Season 3 starts with our beloved “difficults” Julie and Billy running on the CBS stage of the live televised version of Sunday in the Park with George which stars… the cast of The Big Bang Theory. It’s called, Bazinga in the Park with George, because of course it is. She yells “Resist” and he yells, “Don’t ruin our favorite show,” and I 'm 100% confident he's referring to the musical, not the CBS sitcom. 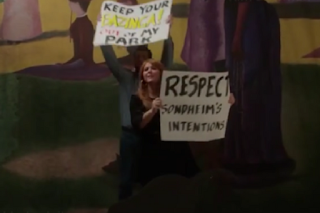 Later, as they do their community service picking up trash on the shoulder of the “Nathan Lane Memorial Roadway,” Julie reveals she needs to go visit her therapist at her old college’s free student clinic, because she doesn’t have insurance and she needs her antidepressants. Especially with Passover around the corner (#chagsameach). How else will she get through a family dinner? How do any of us get through family dinners? There should be a decorative bowl full of Zoloft, Effexor, Lexapro, (and some Xanax for good measure) on that extra dining table leaf at every single family gathering.

A guy in a red Mustang convertible peels up and yells at them, “Do you two outside janitors know where the Trump statue is?” Julie and Billy approach his car pretending to give directions, then promptly dump all the trash they’ve collected into his car. 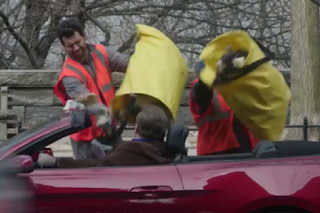 At the café, Nate and Denise are peeved at the negative Yelp reviews they’ve gotten, which puts Billy and Lola on the defensive. Now that daytime shows have soundstages nearby, Nate and Denise want to make sure they can draw in that cheesy talk show $$$$. They’re going to do a 9-minute lunch, where lunch is on the table in 9 minutes or it’s free.

Matthew comes in carrying two huge urns proclaiming, “My parents are dead.” Come to find out these aren’t their urns, they’re just two huge vases he got on sale. As he cries, Denise comforts him and says, “You’ll always be my baby,” until her actual newborn baby starts to cry and she drops him like Trump drops White House staff (aka ABRUPTLY and DRAMATICALLY). 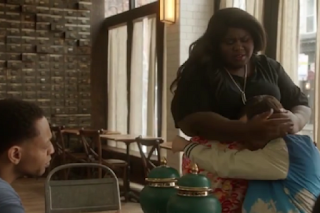 At the free student clinic, Julie watches an ad for an anti-depressant on TV called Ridshadovan. The woman playing the metaphorical shadow of depression in this ad gives me LIFE. She is my spirit animal! Her frown and irritated glare represent my very soul. Asking my doctor to prescribe me Ridshadovan at my next appointment. 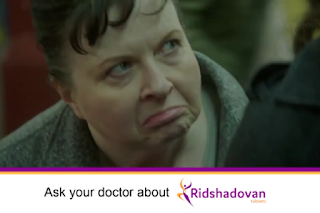 Marilyn’s familiar with it, she tells Julie on the phone, because they sent her “a mousepad and a pubic comb.” She proceeds to run down a list of things Julie’s forbidden to talk about with the Seder attendees: the ACLU, women, cocaine addiction, Arthur, Arthur’s drinking. They’re both dreading seeing that “f*cking b*tch,” Aunt Bonnie.

The elderly woman at the clinic starts to write Julie a prescription for Ridshadovan but dies mid-way, as is prone to happen in today's America. As Julie leaves, a Ridshadovan shadow of depression woman follows her on the elevator. 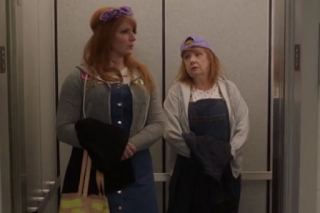 Billy auditions for several jobs at once with a casting director (Christina Gausas) who is hilarious. Suffice it to say, she kidnapped her sister’s dog to force her sister to be her surrogate because she currently has -2 children (that’s not a typo, she has negative 2 children).


Julie and Billy order at the Quizno’s Clinic and Sandwich shop, turkey ranch and swiss for him, visit with the psychopharmacologist for her. The Quizno’s doctor thinks Julie’s there to wean herself off of all the psychotropic drugs she’s on. But he is sorely mistaken. He won’t write her a prescription. 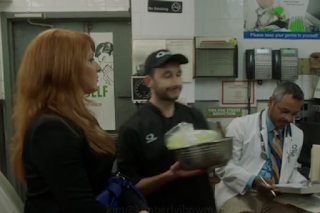 The casting director calls Billy to let him know he got a role. But first, “I need to read you the roles you did not get, starting alphabetically.” Turns out, he's the warm-up comic for Larry Wilmore’s new late-night talk show.

At home, Arthur announces he’s going out of town and won’t be able to join Julie at Seder. PBS is relocating to “Burt Reynold’s old dinner theatre in Jupiter, Florida” due to budget cuts.

As part of their community service, Julie and Billy dress as clowns to entertain sick children at a hospital. A nurse encourages them, “These kids are at an age where they don’t know yet to be scared of clowns.” Billy and Julie brainstorm ways she can cope at Seder without her drugs. They decide on meditation, which is "just like napping!" 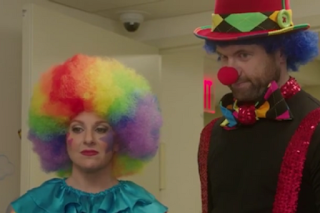 At home, Julie browses the various meditation apps on her phone, from David Lynch, from Marilu Henner, from Danny Aiello. She settles for Danny Aiello. She closes her eyes and begins. Later, she wakes up in front of an ATM, Danny Aiello’s voice telling her “You’re all meditated. Bye.”


As Marilyn preps the Seder table at her place, Aunt Bonnie arrives (STOCKARD CHANNING!!!) and they immediately begin trading deliciously nasty barbs. I could watch these two go at each other for a full hour or two, and never stop smiling. 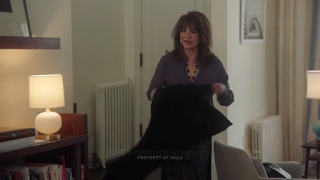 At the café, they’re slammed with lunch customers. Matthew storms in, late for his shift, dressed in black leather, proclaiming “I don’t got parents no more so I don’t gotta do nothin’ nobody says.” He insists on being called Mattman (kudos on the Batman/orphan reference, DP writers.) Nate asks him to wait on some tables but instead he heads into the kitchen, yelling, “You’re not my father.”

Denise laments out loud about what to do with their “out of control teen.” Who should speak up at this exact moment? Maury bleeping Povich, he of the baby daddy reveals and teen boot camp double parters. He wants his free meal because he’s waited more than 10 minutes for his lunch. 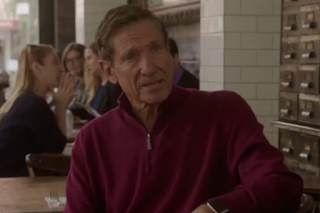 On the set of Larry Wilmore’s show, Billy gets a lesson from Larry on what America loves to see on TV: “party games with celebrities and interviews with precocious little kids by black men over 40.” And he is not wrong.

The showrunner explains to Billy that doing his stand-up is not his actual job. He’s just there to psych up the ravenous vultures in the studio audience. He gives Billy a t-shirt cannon, a CD for the booty shaking contest, prank-call templates, and a list of obvious things to say that will get them to clap.

At Seder, Arthur joins via FaceTime as Florida burns and explodes behind him. Marilyn mutes him so that she and Bonnie can get in a yelling match, which Julie takes as her cue to go meditate in the restroom.

Denise and Nate sit with Maury and explain how much Matthew’s changed in the past one day. Mattman comes in and the other café patrons boo and yell, like a Maury audience would and does.
Denise opens her heart to him and explains that the baby won’t replace him, just as Linda Lavin couldn’t really replace Tyne Daly in the 1989 revival of Gypsy. Mattman tells Maury, “I’m gonna kill that baby.” 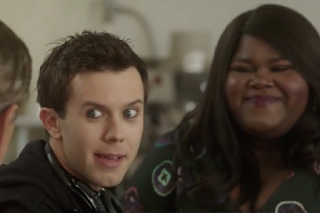 Billy struggles to entertain the cynical studio audience while Larry, watching, decides Billy isn’t right for the gig. Billy starts to riff on how Larry’s previous show bombed and the audience whoops it up. 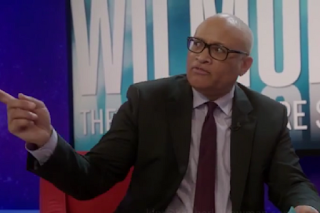 Mikey, the kid with the broken leg from the hospital, shows for a segment of Larry’s show called “little kids say dumb things to big shot Larry.” He spots Billy, tells Larry that he got beat up at school because Billy wrote on his leg cast that he was gay. Worse than that, he ruined “Bazinga in the Park with George.” Infuriated, Larry punches Billy.


As Julie meditates, she realizes her greatest fear is becoming her mother. Danny Aiello talks her through it, and then he tells her to write down his routing number. Aunt Bonnie barges in and asks Julie for cocaine.

Julie decides that the best way for her to deal with her fear about turning into her mother is to just to go ahead and turn into her. So back at the table, she criticizes Marilyn’s blouse, her makeup, what she’s eating. Julie’s depression shadow woman wanders in, who turns out to be Bonnie’s drug dealer.

As Billy and Julie walk down the street wearing sandwich boards that say “We Ruined Bazinga” and “Throw Trash At Us,” Julie figures out she was hypnotized into sending Danny Aiello nearly $700. 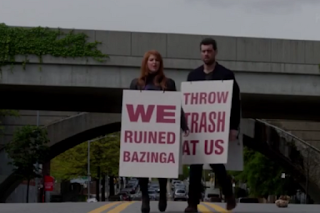 After some Big Bang fans (I assume) throw trash at them, Julie screams, “I got news for you, bazinga ruined bazinga!”

Awesome (and in this case only) nickname Arthur calls Julie in this ep:

- Matthew, regarding his parents’ death by shoot-out: They were murdered at Dollywood. Tennessee is a mandatory-carry state.

- Julie at the free clinic, to other waiting students: See you girls at the quad later. We can talk about vampire novels.

- Billy, regarding the Quizno’s Clinic: Ever since Trump replaced the Department of Health with  Jenny McCarthy’s blog, nothing makes sense.

- Julie: Passover is coming, like winter on Game of Thrones, I assume.


Did I miss anything? Let me know! Until next time...