**This recap contains spoilers so if you haven't yet watched this episode, go do that first**

Episode 302 begins with Julie and Billy waiting in line (on line, for you New Yorkers) for David Blaine’s latest magic trick/show which is called “Suicide.” Because the line doesn’t move and Julie needs to eat before her big Amazon audition, they bail. They encounter a group of waiters on strike in front of a restaurant, obvious by their chants, their signs, and their giant inflatable strike rat. There’s no line at the restaurant, because no one wants to cross the strike line, EXCEPT for Julie and Billy. They go in, getting booed by the strikers as they do. 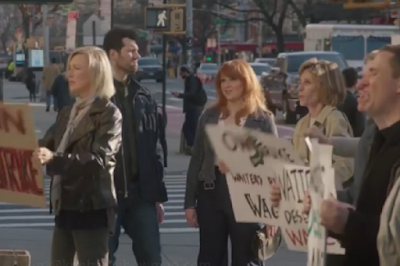 Julie auditions for Amazon with my fave recurring character, the casting director who kidnapped her sister’s dog so she’s forced to be her surrogate. Julie’s Amazon audition is top secret but she DOES find out that it’s for a “film director who is arguably offensive to women.” After incorrectly guessing Eli Roth, Julie correctly guesses it’s for Woody Allen. The project is called Manhattan Mini-Storage. Julie doesn’t want to audition because he is, in fact, offensive to women but she realllllly wants to see the sides (scene used for audition). So she decides to go ahead and audition, accidentally lighting her blouse on fire in the process. 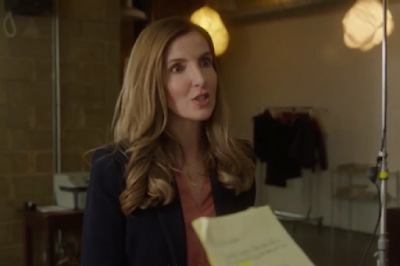 At the café, Nate wants to update their website with pictures. Matthew volunteers his food photography services and Nate takes him up on it. Out of nowhere, Matthew’s ex-wife, Trish (Vanessa Williams), unexpectedly shows up at the café and they’re thrilled to see each other. She tells everyone they used to be the “Prince Charles and Lady Di of Catfish Holler.” Turns out Trish, top rated balloon artist, is in town do an artist residency at the Balloon Saloon (save your time, I already googled it and it unfortunately is NOT real…yet). 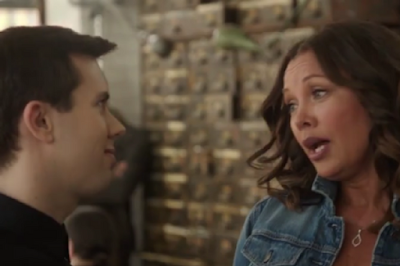 Lola schools everyone on Mike Pence’s new gay conversion program, and she makes sure they know there’s a big protest against it at 3:00 later that day.

Outside the casting director’s office, Julie encounters women protesting against Woody Allen. There, she runs into Andrea Mumford (Shannon DeVido), who you’ll remember from previous episodes as the trash-talking nemesis to Julie. Andrea wants to add Julie to the WAWA (Women Against Woody Allen) blacklist. Julie feigns offense and claims she went up to the casting director’s office to protest, NOT to audition. 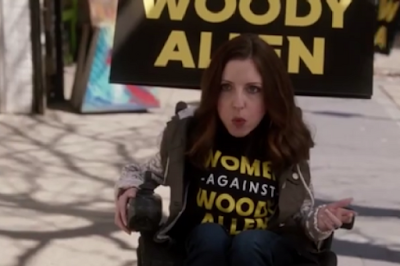 At the Staten Island Pence protest, Lola gives Julie and Billy protest signs to hold. She explains that the Pence conversion program pays $6,000 to anyone who undergoes the therapy from a licensed conversion therapist. Billy takes off to see Marilyn ASAP.

He wants the $6K but doesn’t actually want to be “converted.” And although Marilyn knows conversion therapy is a load of b.s., she IS into getting the M.D. parking privileges that are part of the program. They’re in business! 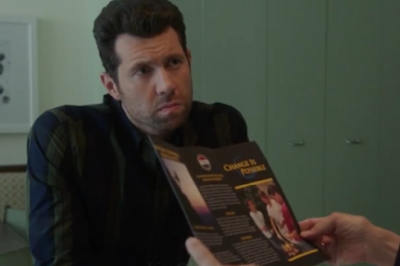 At Julie and Arthur’s apartment, Arthur explains he’s had a revelation about how he infantilizes Julie by cooking for her, which she vehemently denies! As Arthur congratulates her on joining WAWA and they share a “F*ck Woody Allen!” moment, Julie gets the call telling her she got the part in his Amazon show.

At the café, Billy advises Julie to take the part so she can “effect some change from the inside.” Trish comes in with a balloon mouse she made for Matthew. Julie and Billy ask her to make them a giant balloon rat. She agrees as long as they’ll help her “find Matthew and get him alone so I can seduce him.” Uhh, say what?

At Marilyn’s, she and Billy open up their official Pence conversion program materials: a letter for the conversionist sealed with the new Vice Presidential swastika seal (#resist), a hacky-sack, barbecue tongs, DVDs of all three Hangover movies, Penthouse magazine with twins on the cover, and two cans of Coors in American flag coozies.

At Marilyn’s, the therapy is underway. Marilyn wears a baseball cap with “TACOS” emblazoned on it and Billy wears one with “Make America Straight Again” on it. The instructions require Marilyn to show Billy pictures of hot guys, then he’s supposed to be shocked with electricity. They decide to forego that part. 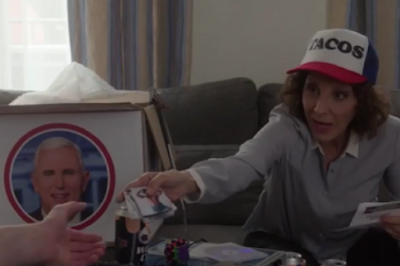 Trish’s giant strike rat is ready to go so Julie and Billy wheel it down to the David Blaine “Suicide” show. They pretend they’re museum workers protesting the show. The people in line clear out, in order to support these poor mistreated museum workers. 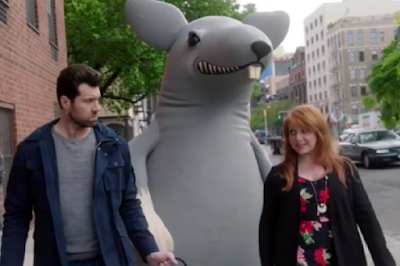 At the café that night, Matthew’s taking photos of food for the website when Trish comes in, trying to seduce him. As he only half-heartedly fends off her advances, they make an absolute mess of the café, food and broken dishes litter the floor, the tables, the bar, everywhere. 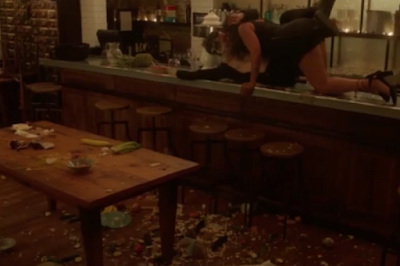 Back on the set of the Woody Allen show, Julie delivers her lines to the elderly barber shop customer from earlier, “I’m a mental imbecile, but you, you’re vibrating on a sexual energy. I must be your muse.” Which accurately embodies every female character in every Woody Allen project to date. The scene goes on and on, because Woody’s not there to yell cut. Because he’s hiding somewhere taking a nap. 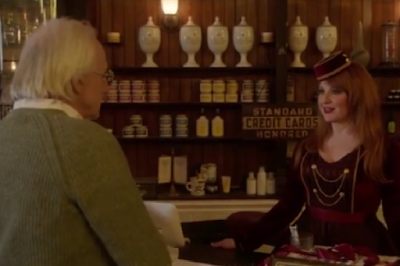 A member of the crew (Shannon O’Neill) instructs everyone to spread out and look for Woody using the special call they use to find him - which I can’t describe very well in writing but which goes a little something like this: Wawaaaaaaa, Wawaaaaaaa, Woodyyyyyyyy, Woodyyyyyyy. If they managed to get through that scene in one take without anyone laughing, they are TRULY professionals, because it had me in stitches. 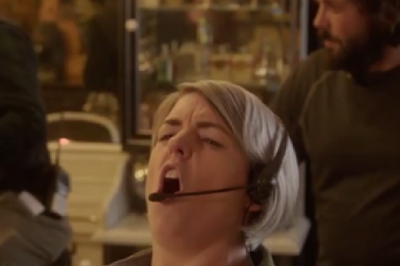 Julie finds a fishing hat and some Knicks tickets in a dumpster, leading her to believe he can’t have gotten very far. Andrea and the WAWAs show up, spot Julie in costume on the set, and realize she’s a liar who’s been working the show. She promises she’ll give back to the cause as soon as she “makes it.” They don’t care. She’s officially on the WAWA blacklist.

The show has to shut down because Manhattan Mini-Storage is the name of an existing business and “Woody doesn’t want to go the effort to pick a new title.”

At the Pence conversion program office, Marilyn and Billy want to collect their prizes: Billy’s $6K and Marilyn’s M.D. parking permit. The clerk doubts Billy is “no longer gay.” But Billy insists he’s been successfully converted, “Serve me up some hot wings, fire up Better Call Saul and please ask me how I feel about women who don’t wear makeup.” 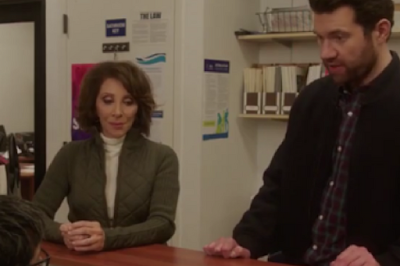 The clerk gives Billy his “straight bucks” which is just a Tommy Bahama gift card for $6,000 - to make sure he spends his money like a straight guy. Marilyn’s parking permit is actually a new license plate for her car that says “I CURE GAYS” across the top and “AND BELIEVE IN JESUS” across the bottom.

Trish comes in to collect her $6,000 but when confronted by Billy, runs out in tears instead.

Pulling strike rat down the street, Billy and Julie get accosted by a group of strikers who assume they’re there to protest against them. But Billy and Julie claim they’re actually sexual fetishists who like to pop balloons in front of strikers. A protestor demands they pop their strike rat balloon to prove their story. They claim they can’t do that b/c they’ll both experience an orgasm right there on the street. 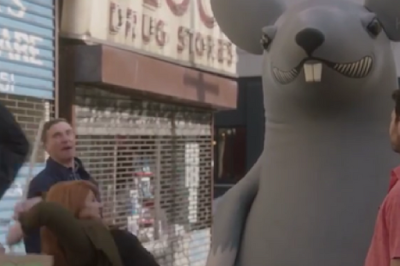 They protestors chant “Pop that rat, Pop that rat!” so Julie does just that.

- Billy: All these protests, they keep popping up like Cosby accusers.

- Billy to Trish: Awww, Trish. I can only imagine your backstory.

- Trish to Matthew: Remember our wedding night?
Matthew: You had a hell of a nerve wearing white.
Trish: And so did you.

Did I miss anything? Let me know! Until next time...

*All photos courtesy of Hulu, unless otherwise noted.