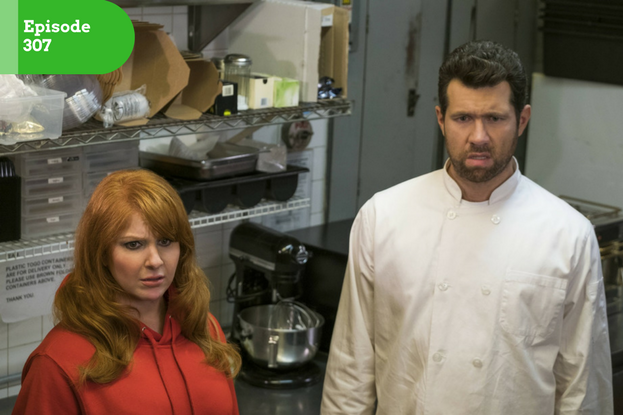 **This recap contains spoilers so read at your own peril. Your best bet is to watch the episode first, then come back here.*

Standing in pays $250 a day if you look like famous stars who don’t want to show up for unimportant shots. Once he examines Julie and Billy from the back, he determines they’re “perfect for a high-end gig.”

They jump at the chance. The next day, Logo is announcing their new lineup and new tag line, post RuPaul: Logo, Under Construction, Bear With Us. Julie and Billy are to be the homelier stand-ins for Eric McCormack and Debra Messing. 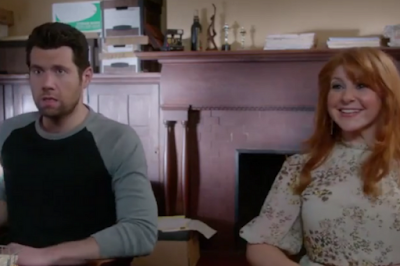 At Marilyn’s, Julie tells her she’s got an audition for Nashville to play the ghost of Connie Britton from behind, so she needs to do a lot of deep conditioning.

Marilyn wants to redeem a coupon Julie gave her as a child for her upcoming 65th birthday. For her birthday, Marilyn wants to have a bat mitzvah and she wants Julie to plan it for her.

At Julie’s, Billy and Julie are making a vision board for themselves. Billy’s includes a lot of pictures of Nick Jonas and the cast of the TV show Bewitched. 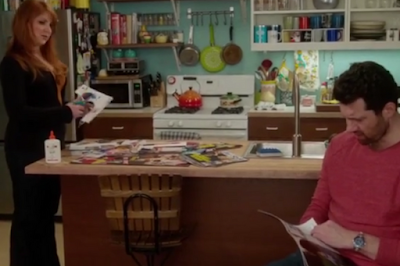 Billy tells Julie how he once wrote a fan letter to Mickey Dolenz asking his advice on what he should do with his curly hair.

In one of the magazines, Billy reads that the showrunner of Fuzz Buddies, Neal Kaplan (Damian Young), is in a coma. Billy reminds Julie that Neal was also the showrunner of a failed Gina Gershon show, Dumb Whore.

Julie puts the picture of NeAl on her vision board, because she wants to be a showrunner. Go after your dreams, everyone! Coma or not!

Mickey Dolenz comes to the cafe, looking for Billy. 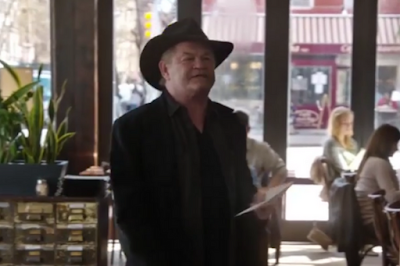 Billy loses his mind with excitement. He came to thank Billy for his 30-year-old letter.

At home, Arthur tells Julie it’s going to be hard to pick from all the great shows in the running at PBS for pilot season. 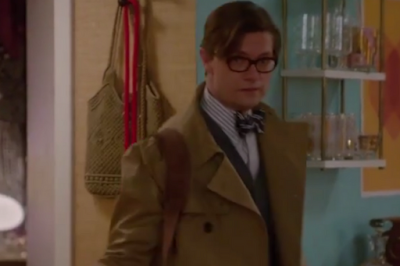 Julie reads that her old friend Kenny, who was more than a friend, wink wink nudge nudge, replaced Neal Kaplan as showrunner for Fuzz Buddies. She decides to email him to see if she can write for the show. 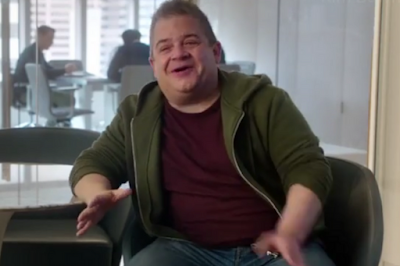 He’s relieved she wants a writing job, because he was afraid she wanted to meet with him to tell her that they had a 12-year-old kid he didn’t know about.

Julie mistakenly thought the show must be edgy and funny, since they hired Kenny as the showrunner. She was wrong.

Fuzz Buddies is a kid’s show on Nick Jr. about a panda, a kitten, and a sunflower. She STILL wants to write for the show, but she has no experience with writing for kids.

The network wants someone who’s good with story. She tells him her nickname is “The Story Machine.”

She goes on to tell him that Neal Kaplan himself coined this nickname for her. If only he weren’t in that darned coma, he could verify her story! 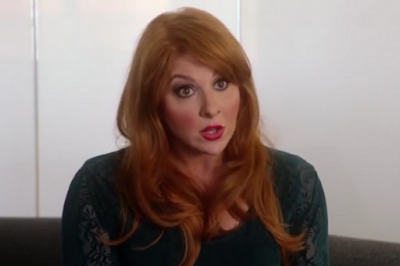 Before she leaves his office, Julie warns Kenny that “in case any old feelings reemerge, she has a boyfriend.” He tells her not to worry at all because “I’m sober now.”

On the set, standing-in, Billy tells Julie he was up all night because Mickey Dolenz showed up at his place at 4:00 AM with a guitar and “a lot of stories.” 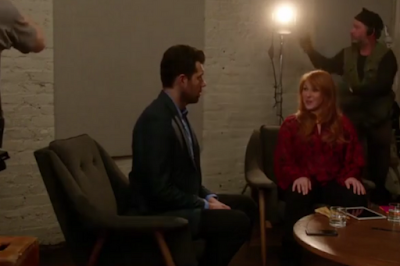 Turns out, Billy and Julie are standing in for Mike Rinder and Leah Remini for Scientology and the Aftermath on A&E.

The director addresses Julie as “woman stand-in,” and tells her to “put on the nails” and to “scroll that iPad in the weird way that Leah does.” She does and it is weird. Billy takes Mickey to the cafe post-hospital stay. He asks why he’s his emergency contact. 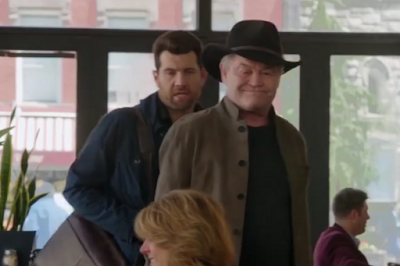 Mickey doesn’t have any family and all his friends are dead. Billy asks, “What about Peter Tork?”  Mickey says he’s “more like a work friend.”

Mickey’s dying and he wants to leave the world in a bang. He wrote a one-man show and he wants Billy to look at it and give him some notes.

He throws a giant, messy, three-ring binder on the table and sets a “notes call for Thursday,” before he leaves. 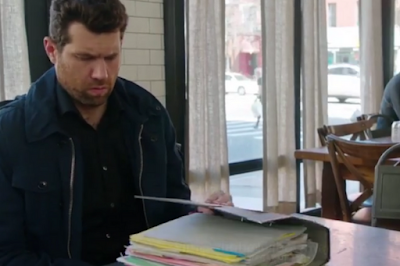 Julie drops Marilyn off at her bat mitzvah Torah class. The rabbi asks the girls in the class to introduce themselves. 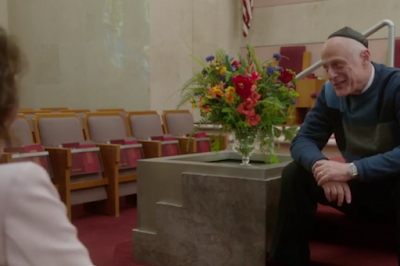 One of the other girls in the class, Shoshanna, declares that her bat mitzvah theme is “At least I’m not as old as her,” meaning Marilyn.

In the writer’s room of Fuzz Buddies, Julie is introduced to her new fellow writers: “Eric the story monster, Lyle, his brother, the joke beast, Izzy and Taz from the pick-up artist community, Brian from Harvard (H. Jon Benjamin), and YouTube sensation Demios of Childese.” Julie is introduced as “a woman… and a story machine.” 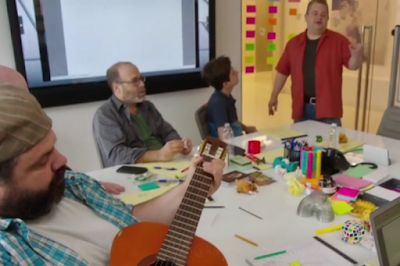 Brian from Harvard (which is probably the way he introduces himself to everyone, don’t @ me you Ivy Leaguers, I know I’m right) immediately asks Julie if she can take a joke or, “Are you one of those uptight feminists?”

She replies that she hates women and that she got into TV writing so she could “not write for them.”

They start brainstorming ideas for the show, for panda’s birthday party. 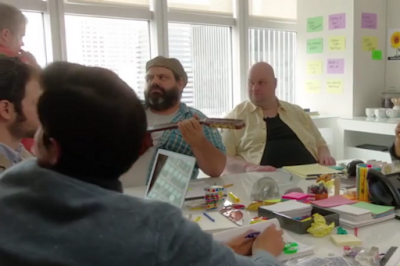 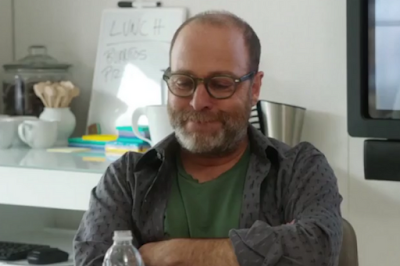 Julie pitches an idea and Kenny asks her, “How does that fit into the story diamond?” She has no idea what that is. Brian from Harvard can’t believe she doesn’t know about it. Kenny invented it. It’s a very unnecessarily complicated system for writing a story.

Julie tells Brian from Harvard that Neal, the old boss, didn’t use that and he preferred Julie’s way of breaking stories. Too bad we can’t call Neal and ask him, “cause he’s in that coma.”

At home, Julie and Billy do some cake tastings for Marilyn’s bat mitzvah. 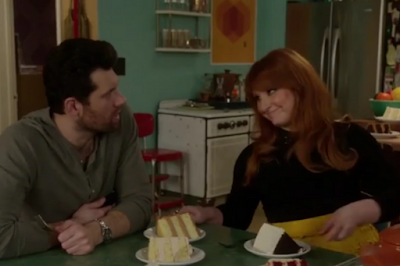 Billy and Julie share stories of how what they thought would be dreams coming true are horrible.

Arthur comes home to see Billy and Julie eating cake, “Either your first day of work went poorly or Pete Holmes got another break.” 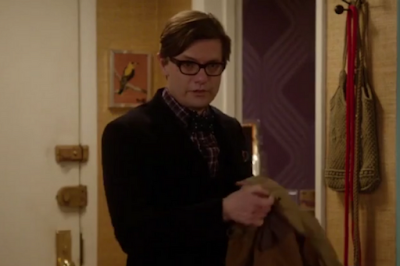 Julie tells him, “TV writing is just people stuck in a room together talking all day. It’s like a cocktail party with the ugliest people on Earth.

Mickey storms into the cafe while Billy is working. He wants to discuss Billy’s notes with him. Then he gives Billy more to read. Billy is over it, “I’m done.”

Mickey leaves, but not before telling a table of customers, “Mickey Dolenz. I’m dying!”

In the writer’s room, the gang hasn’t written a word all day. At 10:15 PM  (that's PM, not AM), Kenny rants to the group about his ex-wife while drinking a beer.

And if you ever needed or wanted a Master Class in TV Writing, this is it. Reality masked as fiction. Enjoy. 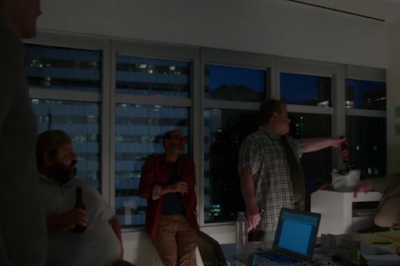 The next morning, Kenny is fully hopped up on cocaine and demanding story ideas.

Julie pitches an idea that Brian from Harvard hates and Julie loses it.

She tells him her idea fits perfectly into the double helix that she and Neal came up with when they were “working on that Gina Gershon show together.” 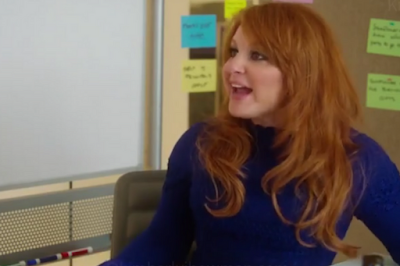 A half hour later, Julie has just about wrapped up her complicated double helix story system. 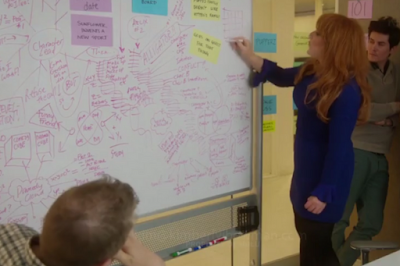 Brian from Harvard is confused and Julie yells, “If Neal were here, he would laugh at you!” Guess who strolls in. 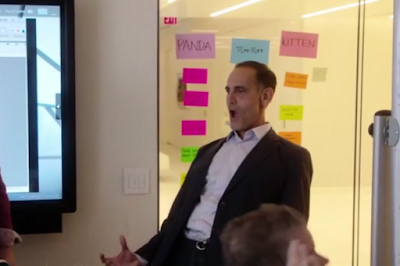 Yes. He of the former coma.

Of course, Neal doesn’t know who Julie is or what a double helix is.

She says, “I quit anyway. None of you have any point of view formed outside your own shitty lives. You guys are bad writers. Not just because you lack imagination, but because you lack empathy. So suck my fat tw*t.”

At the cafe, Billy declares the dream boards only gave them what they wanted “after we didn’t want it anymore.” 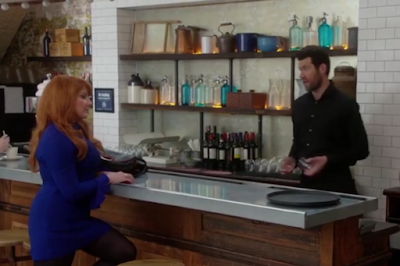 Julie got paid for the whole week, so there’s that.

Billy shows Julie the song Mickey dropped off, it’s called “Number One Fan.” And it’s about Billy! Mickey is Billy’s number one fan. Billy decides he won’t quit on Mickey after all.

At Stan Din’s office, she hires him to fill the synagogue in three hours.

At the synagogue, Julie finds Marilyn crying over the empty synagogue. 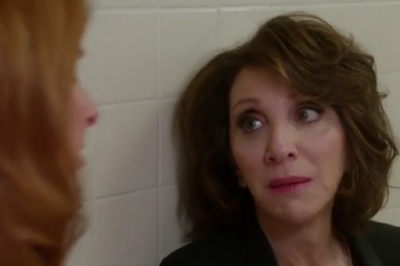 Julie reassures her that the synagogue will be full soon enough. To cheer her up, she reads her the toast she’s going to make. It’s lovely.

Marilyn takes the stage at her bat mitzvah and reads from the Torah. 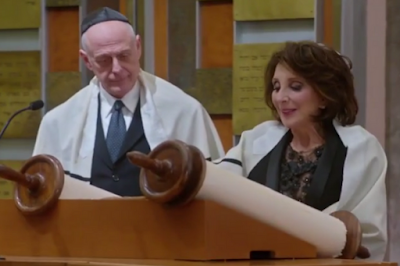 The rabbi spots Mickey Dolenz in the audience and yells how he wasted a year of his life helping write his one man show. Turns out, Mickey isn’t really dying. He just wanted free notes for his show.

The episode ends with Billy and Julie standing in for Guy Fieri and a rack of ribs.

They get splattered with “donkey sauce” and I truly can’t bring myself to google what the f that even is. If you know, you have my deepest condolences.

Julie: I was excited to finally get the opportunity to prove that Marg Helgenberger and I aren’t the same person.

Julie: ABC is doing a Game of Thrones rip-off called Dragons and Rape.

Julie: There are no women allowed at Adult Swim.

Marilyn to Shoshanna: My Romanian hairdresser costs more than your private school tuition, you little b*tch.


Did I leave anything out? Let me know. Until next week....

Speaking of next week, here's your synopses from Hulu, for next week's episode, "Criminal Minds:"

Julie “Yes And’s” her way into a corner with her former improv teammates and ends up being caught in a significant lie. Billy and Todd can’t fall asleep in the same bed together. Meanwhile, Arthur uncovers a secret at work and Marilyn and Matthew bond.