**This recap contains spoilers so if you haven't yet watched this episode, go do that first*

This episode opens on Julie and Billy wandering into a church looking for a place to charge their phones “without having to buy anything.”


During an AA meeting in a back room of the church, Julie finds an outlet. She unplugs the lights to plug in her phone and a voice speaks up, “Uh, hey!” It’s the meeting leader, Vanessa (Rosie O’Donnell). 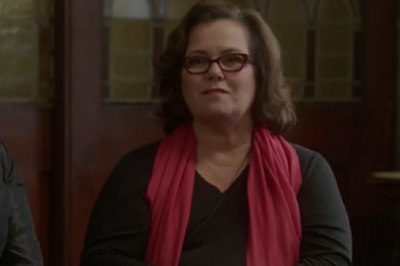 Julie decides they should stay for the meeting because her phone will take forever to charge anyway. After the meeting Vanessa introduces herself to Julie and Billy. Julie mistakenly thinks Vanessa is hitting on her. She tells Vanessa, “I have a boyfriend.” Vanessa eyes Billy and quickly says, “Oh he’s gay.” Julie tells her Billy’s not her boyfriend. Her actual boyfriend is WAY more effeminate.

At her place, Marilyn drops this lil nugget: “Julie, I believe my dentist is trimming my bangs while I’m asleep in his chair.” And she has before and after selfies to prove it. Only she can’t tell the difference. Julie can’t believe she came over her for this and Marilyn guilt-trips her into staying.

At PBS, Arthur gets pulled into his co-worker, Gabby’s office, to discuss another co-worker, Lester from sales. She references what looks to be the very first ever desktop PC from 1980 something and says, “He can’t learn our new computers!” Gabby wants Arthur to coach him. 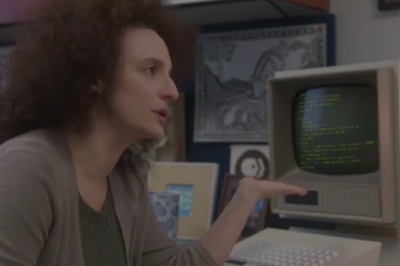 At Arthur and Julie’s apartment, Arthur tries to help Julie achieve sexual nirvana (as they say) but fails, and he can’t understand why. Julie comforts him, “Don’t feel terrible! Millions of women go to bed every night without having an orgasm. All of their husbands voted for Trump.” Amen. Julie reveals that she went to an AA meeting to charge her phone and discovered she’s addicted to her mother.

At Billy’s place, he takes a call at 6 AM from his sister-in-law Rachel (Jackie Hoffman) because she heard noises in her house. Gary, Billy’s brother, is still in Israel so she’s there alone with her daughters. “Please come!” she asks. So he does.

When he gets there, he wants to know how long this will take and what exactly she wants. “The answer to all your questions is shut the f*ck up. Where do you have to be? A loser convention?” Same old Rachel. 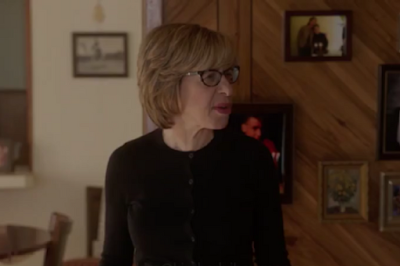 She thinks the noises are due to the new gentile neighbors across the street. She thinks they come in at night, move things around and then leave. Billy’s not buying it. “They could have guns, or polo mallets!” she pleads.

She opens the front door to confront them as they play badminton in their front yard, “Hey you Christmas celebrators! Stop creepy-crawling and get out of our neighborhood!” 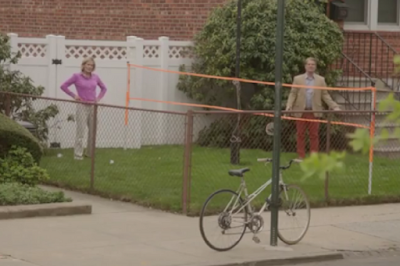 At the café, Billy recounts to Julie how he had to run over and apologize to the poor gentiles from Eureka Springs, Arkansas. She tells him how Arthur’s upset that he can’t help her achieve sexual nirvana. “It’s not complicated! It’s not a circuit board! It’s a series of mechanical actions that you learn and repeat.” Like a combination lock. Only she thinks after three failed attempts, Arthur’s been locked out. Matthew overhears them from the bar, and proceeds to tell them how his “code changes every day.”

Denise is ready for Nate to return from rock-n-roll camp, which he does – carrying an electric guitar.

Marilyn calls Julie from Saks yelling EMERGENCY into the phone because “everything my personal shopper picked out for me is way too boxy.” Julie hangs up and instantly calls her addiction sponsor, Vanessa.

At Rachel’s in the middle of the night, Billy checks the basement for her. She thinks there may be a Dybbuk down there. Billy is, naturally, defiant. Until he hears a noise too. He goes to the basement, where he finds… Gary (Fred Armisen)! The Israeli army didn’t want him so he’s been hiding in a tiny room in the basement. 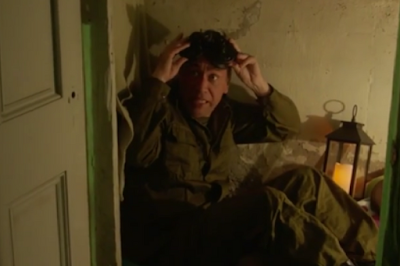 When Gary got to Tel Aviv, they checked his vitals and told him his Dramamine levels were too high so they sent him home. From upstairs, Rachel wants to know what’s going on. Billy tells her to stay upstairs. Gary wants to wait a little longer to “come home” because then he’ll get a hero’s welcome. Billy, guilted into helping Gary remain in hiding, goes upstairs and tells Rachel, “You’ve got a Dybbuk.”

At the café, Billy explains to Julie that he’s going to stage an exorcism so Gary can pretend to come home from the Israeli army. Julie tells him Arthur told her to block off three hours tonight for the two of them.

From a microphone in the corner, Nate announces that his band “Orders Up” are all over 40, all own restaurants, and all met at rock-n-roll fantasy camp. They proceed to play and it’s horrible. 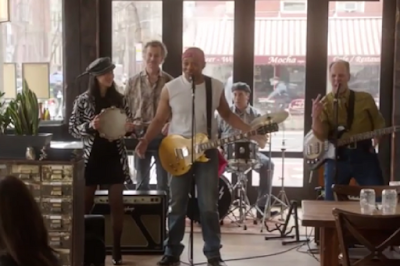 Back at Rachel and Gary’s, Rachel is googling how to get rid of a Dybbuk. They have to assemble a group of 10 men who’ve been bar mitzvahed. Billy suggest she uses Tinder, she decides to use J-swipe, Jewish Tinder. She creates a profile for the ideal Jewish girl.

At Arthur and Julie’s place, Arthur is pulling out all the moves: the Braille Wishbone, the Morse Code News combined with Reach For the Rest of the Peanut Butter Under the Lid of the Jar, the Double-Handed Vulcan Salute, The Other Becky from Roseanne. To no avail. 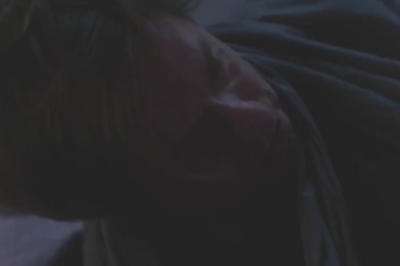 Back at work, Arthur’s co-worker Gabby tells him she’s going to have to let Lester go. Arthur insists, “Maybe the problem isn’t Lester. Maybe the software’s changed!” As Arthur stands over Lester, watching him punch in keys on the ancient computer, he gets annoyed and takes over. 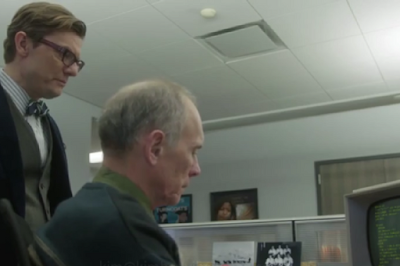 At Rachel and Gary’s, a group of Jewish men are assembled in the living room and are there to meet Debbie, the young girl they supposedly matched with. They proceed to discuss camp and how that was the happiest they’ve ever been, their various doo-wop groups, etc. 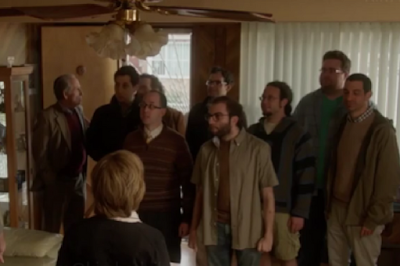 Julie meets Vanessa for a pep talk. Vanessa tells her she has to get a handle on her addictions. As she’s talking about her mom, Marilyn calls. Marilyn wants Julie to come replace her energy efficient bulbs with economy wasting bulbs. Julie tells her no and Marilyn just about flips.

Marilyn’s therapy patient calls Julie, “I just called 911. I think your mom is having a heart attack!” Marilyn clutches her chest and yells in pain. 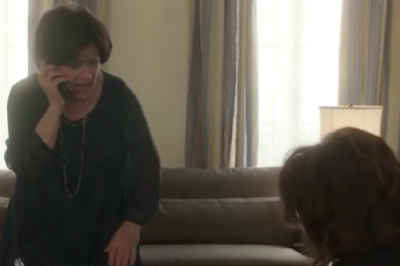 At the hospital, Marilyn accuses Julie of giving her a heart attack. They argue about Marilyn guilting Julie into doing what she wants when she wants it.

At Rachel’s, the Dybbuk exorcism in in full swing. The J-swipe men sing a traditional blessing Rachel gives them. Billy has to join in so 10 of them are participating. As Rachel chants and prays, Gary sneaks upstairs from the basement. 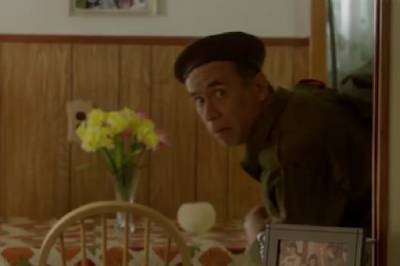 Back at the hospital, Marilyn wants Julie to get her out of there. She laments that her death might bring Julie some relief, which of course, Julie argues against. 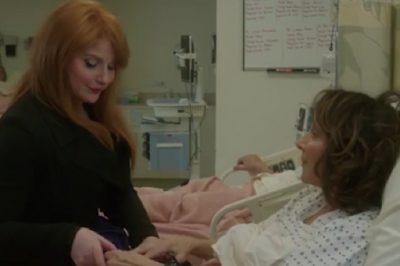 At Arthur and Julie’s, they agree they’re not even going to try to do anything. They’re just going to sit there. Then nature takes its course. Success! Julie concludes, “Maybe if you’re turned on enough, there is no specific code.”

Julie gets a call from Vanessa who wants to know if she’s going to come to the meeting. She’s not, she’s decided to remain addicted to her mother’s guilt.

At Rachel and Gary’s, Gary tells the girls and Billy how difficult it was in Israel. 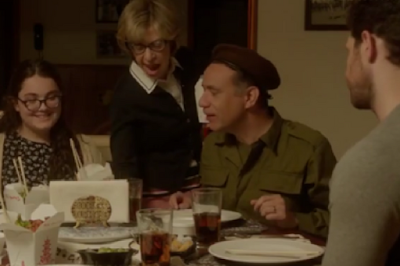 Gary and Rachel thank Billy over and over for his help. As Billy leaves, he realizes the guys in the living room are still there, still waiting for Debbie to finish diffusing her hair.

At PBS, Arthur strides in, all smiles. He fires Lester and dances with Gabby briefly. 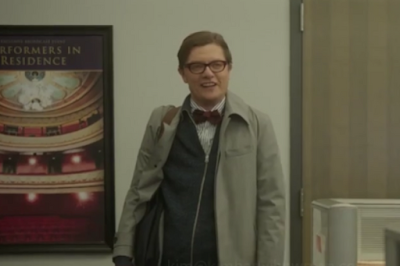 At the café, Nate and the “Orders Up” band are still playing. Denise hates it. Lola grabs the mic and starts to sing a “real song you can find on youtube called Building Seven.” And (WOW WOW WOW) Lola is correct. I refuse to link to it because I am NOT perpetuating a b.s. conspiracy theory some nut-job wrote a song about. Take this instead.

Throwaway jokes I love:
- Billy: What’s the opposite of endorphins?
Julie: Judaism.

- Billy to Gary: This is like Room if that abuser had kept kosher.

- Billy to Julie: There’s nothing hotter than reserving the amount of time it would take to watch The Hobbit for your lover to insist on pleasuring you.

- The Brandeis University acapella group is called the Jew-wops.

-Arthur to Lester: God d*mn it, Lester, I don’t need to watch you fumble around like Ronald Reagan in either term.

- Billy to the waspy neighbors: A margarine casserole? That is so sweet of you.

-Billy to Gary’s family: I will see you all at the next unpronounceable holiday.

Did I forget anything? Let me know... until next week.